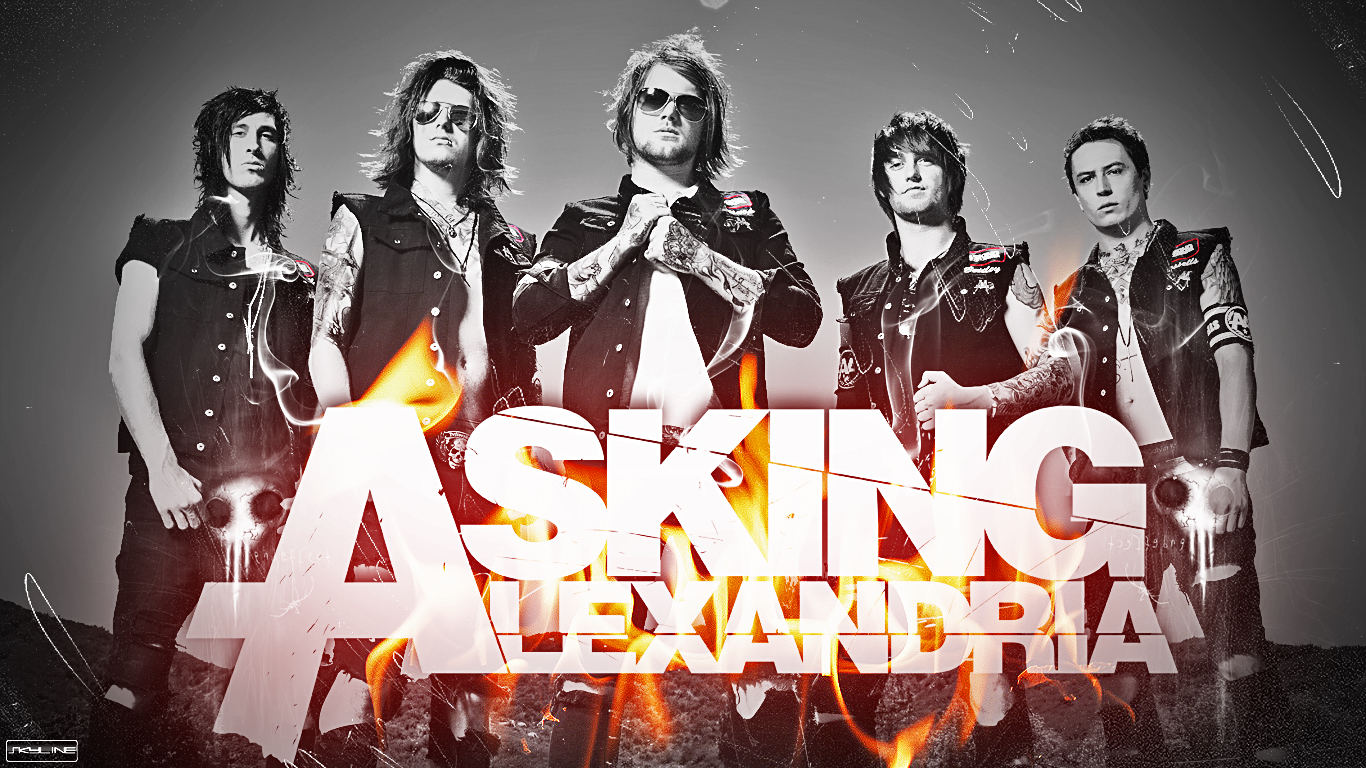 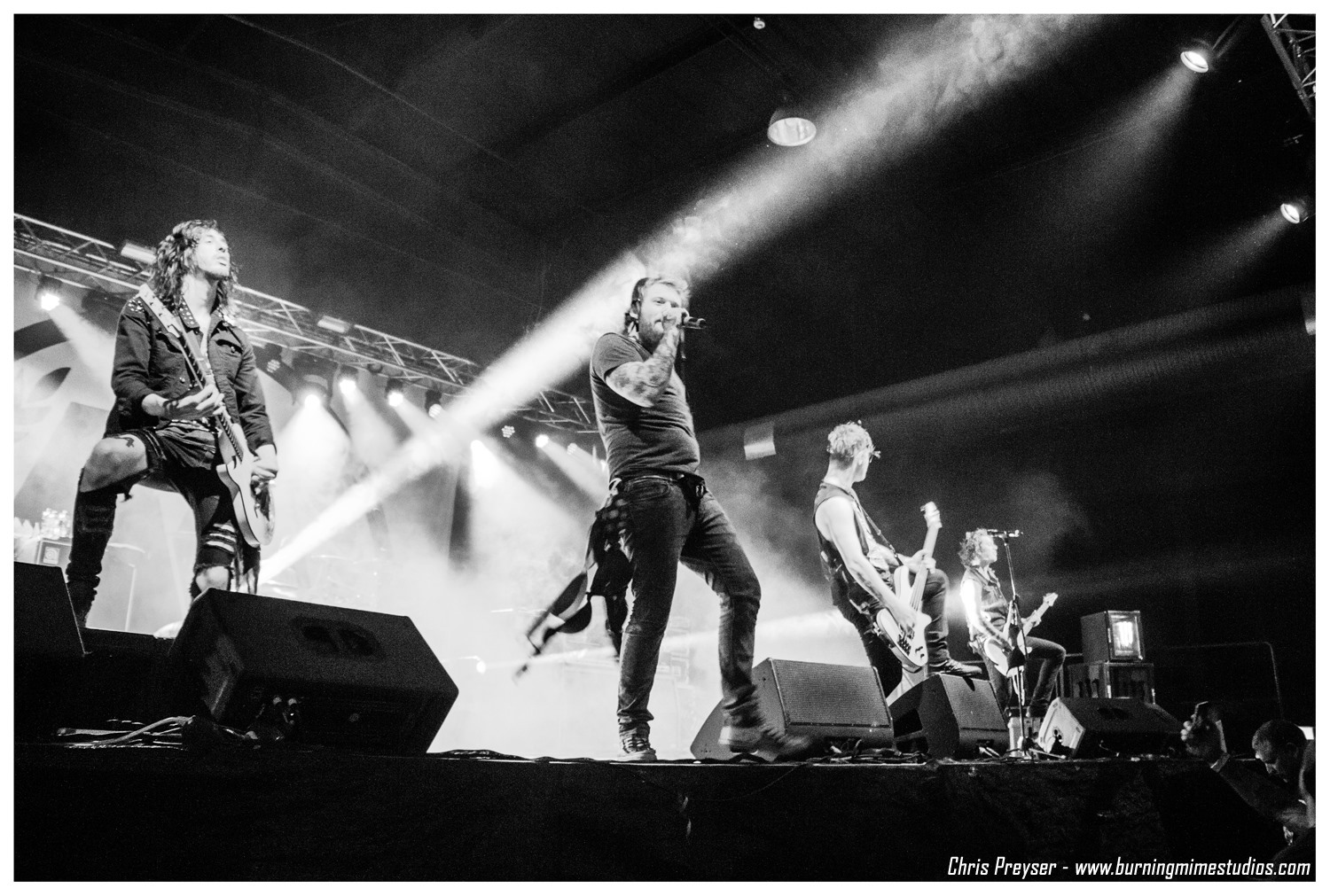 The beer was cold, the whisky was packed and the stage was set for one of the most amazing events ever to be witnessed in South Africa. A couple of months ago I thought my eyes deceived me when RAMtouring announced that Asking Alexandria would be touring South Africa. Two shows, two cities and the promise of total chaos. Would Asking Alexandria live up to the massive expectation? Would there be enough fans to show the RAMtouring organisers that South African metal fans deserve to see more quality metal outfits? Would Bryan Binneman, Facing The Gallows vocalist, get a fitting send off, after announcing that he’ll be leaving the band? All these questions were answered in due time, and man I (nor anyone there) was disappointed.

As we arrived I was a little worried at the sight of only a handful of fans outside gate 2 at Nasrec, guzzling down copious amounts of alcohol…”Where are all the people?”. Only to realise later that most of the attendees started the party without us in the beer garden. I was relieved to find that the issues that arose at the Lamb of God show in February had been ironed out…There was 3 bars where you could buy booze, yes 3!!!!! The longest we had to wait for beer was 5 minutes, and that is soley because I could not decide how many beers I wanted – If I was a bit more decisive, 5 minutes would have been 3. The food stalls guaranteed the same experience – 5 minutes for a boerewors roll (yeah son, metal and boeries go together like AWB tannies and brandy & coke).

I was amazed at all the young people that was at the show, to be totally honest it was heart warming, because the future of metal music does not rely on the 50 year old Iron Maiden fan, it relies on the tattoo and-piercing infested 18-25 year old demographic. Why heart warming, you ask? Because, the majority of the people between 18 and-25 years old listen to overproduced, “chart topping”, lyrically consumer driven bullshit. So all you “born frees” and “90’s kids”, well done for being there and tell your friends to stop listening to Justin Beaver, start drinking beer, eating meat and listening to rock & roll and metal music.
Anyway…

It was time for Facing the Gallows to get us warmed up for Asking Alexandria. This was set to be an emotional affair as it was Bryan Binnemans (vocalist) final appearance with the band he has helped shape over the last couple of years. The first time I checked out Facing the Gallows was at Oppikoppi 2010, Sexy Crooked Teeth. A couple of skinny dudes walked out on stage followed by another skinny, significantly shorter, guy (Bryan). He was wearing a wife-beater and poly shorts, he looked up at the crowd, smiled, uttered the words (in a very friendly tone) “Hay everyone, we’re Facing The Gallows” and then he let out a ground shaking scream that haunts my dreams. Roughly 5 years later Facing The Gallows gave that, still short and skinny dude, an extremely fitting good bye (although they have one more show with Bryan on vocals at Rumours on the 10th of May, at Riot Fest).

They were not intimidated by the big stage and the mind-blowing sound; they made playing before a big crowd look like a walk in the park. The performance was energetic, tight and entertaining. I would hazard a guess and say that 60% of the people that attended the show were not familiar with Facing The Gallows, but I promise you that 60% of those people became fans on Saturday. Facing The Gallows released a new album called Chapters; GO AND GET IT!! I have it and I promise you, you will not be disappointed. You can find it on iTunes or if you tweet them @ftgallows or scribble on their Facebook page: https://www.facebook.com/facingthegallows they can hook you up with an album. To the guys from Facing The Gallows; Cadillac (guitar), Ray (Bass), Victor (Drums), Chase (Guitar) and Bryan (Vocals) well done, you held South Africa’s name high and you should be proud of the fact that you tore Nasrec a new one on Saturday. (9/10)

Check out ‘Avarice’ from the new Facing The Gallows album, Chapters:

Not one second….that is how much time was spent not looking at the spectacle on stage. From start to finish Asking Alexandria had the crowd’s attention. Not necessarily due to Danny Worsnob’s (Vocalist) witty banter, on the contrary most of his comments were focused on convincing the ladies to whip out their chesticles and wave ‘em around like they just don’t care. Not like they needed a lot of convincing, Asking Alexandria was half way through their set when Danny already boasted with a back-jean- pocket full of bras.
Danny and Ben Bruce (Guitar) pretty much ran the show, with Cameron Liddell (Guitar), Sam Bettley (Bass) and James Cassells (Drums) providing the necessary eye candy for the ladies that did not feel up to exposing themselves. I dig it when a band has fun on stage without sacrificing a technically perfect performance….I call that the total package, because there is something for everybody; The metal purist can enjoy the intricacy of the riffs, drum fills and breakdowns, whilst the rest can enjoy the on stage antics.

As I was watching the show I thought to myself…”I would love to party with these guys”, then my eye caught the bottle of Jack Daniels that Danny was clutching in his left hand- regularly taking a swig at will-while the lyrics from ‘Closure’, which they played at that exact moment, was howling in my ears…’They say that I can’t last a day in the real world… I say you wouldn’t survive one night in mine’…and I realised that I will die if I attempt to party with Asking Alexandria.

They played a 3-song encore, ending of with their first big hit, from their first album ‘Stand Up And Scream’, a jam aptly called ‘The Final Episode (Let’s Change The Channel)’. Overwhelmed by the sheer passion and energy of the crowd, we (a friend and I), hooked in with fellow fans and bounced till we could bounce no more. Sweaty, intoxicated and with a black eye (cause a girl over enthusiastically jumped in the air, fell backwards and smacked the shit out of me with her elbow) I could not get myself to leave Nasrec immediately after the show. It was as if I was stuck in limbo, hoping that they would walk out on stage and be like “ hay how ‘bout we play the whole set list again?” or maybe they would play one more song… alas. (10/10)

Saturday night, for me personally, was the benchmark RAMtouring should try and emulate. The crowd showed that, should RAMtouring bring the less recognised metal acts, they will come out and support the shows. Bring August Burns Red, The Devil Wears Prada, Of Mice and Men, hell you can even bring Bring Me The Horizon again, we will go and check it out. Well done to RAMtouring, the event organisation was spot-on and for that you, my friends, deserve a Bells.