There I found myself, bathed in red light and cigarette serenity. As my imagination wondered into reminiscence of an Amsterdam gracht, a Behringher bass amplifier started to groan and you could hear fiddles with drum keys. So began the stirring that woke the realization in my consciousness that the Red Right Hand was finally back and Trashcan was about to blast 2016 through whatever the fuck was about to happen.

The sound check teased in anticipation as nerves started to gradually grow with the crowd. A grainy vocal harmony started through a distorted and dilapidated 15wat guitar amplifier when a sudden whistle accompanied with a circular hand signal flew in from the door and across the hall, silencing the guitar feedback, leaving a moment of (out of wedlock) pregnant pause until suddenly the unmistakable “7 in hell” kicked in. 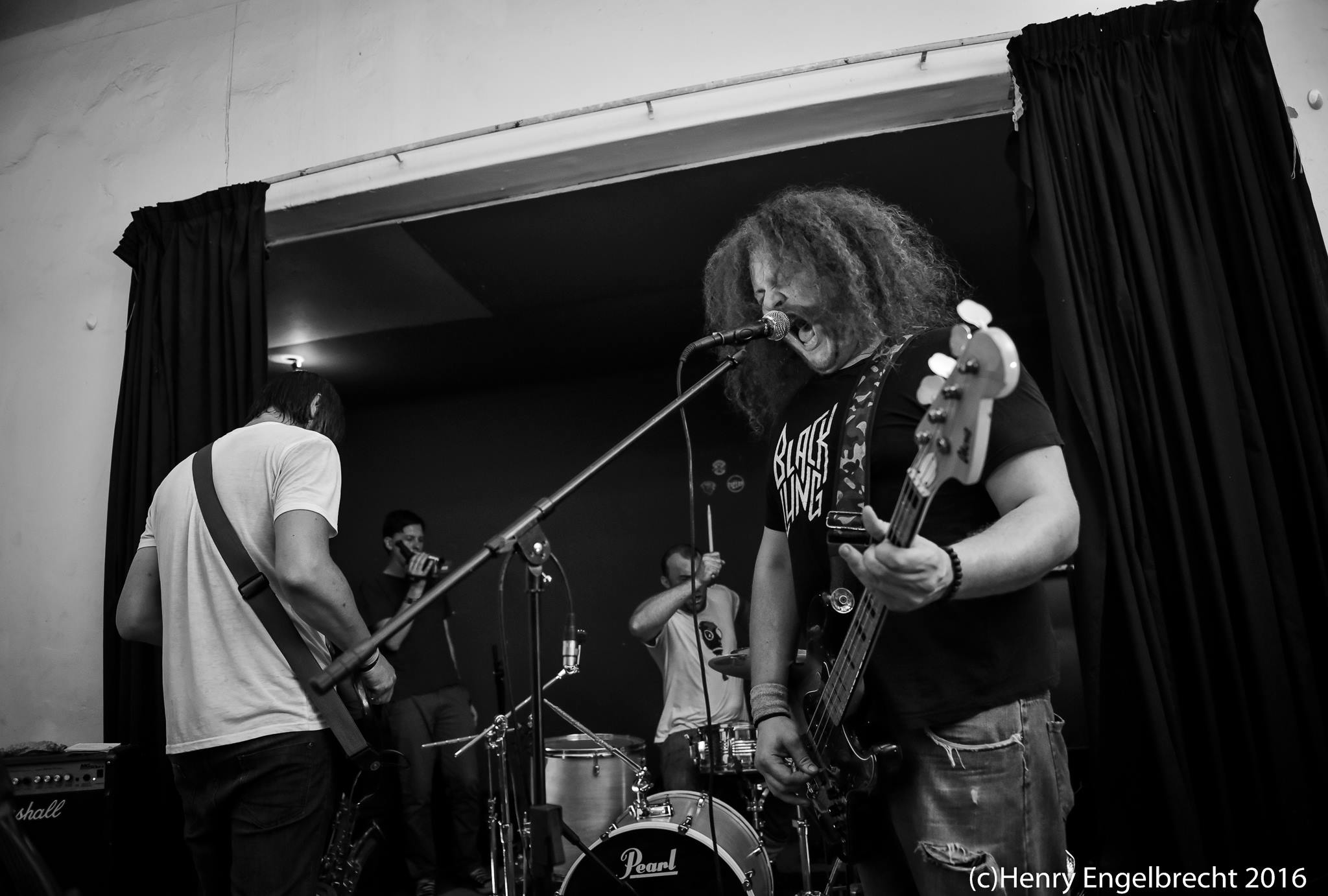 What I love about the garage/noise/art rock movement that is finally taking the South African underground by storm is that there are no rules. You can do whatever you want, thus, creating a platform for artists & bands to freely express and explore themselves and others. The barriers of art theory and punk finally publicly reveal their bastard child and my oh my, she is a beautiful bitch!

Within this ambition you will struggle to find performers as refreshing as Training Brah. Juxtaposing true DIY and garage aesthetic with rhythmical elegance and texture, this male & female 2-piece delivered a performance far beyond my wildest imagination. There is a certain magical thing that happens to a performance, and more specifically to the music when members of a musical group alternate between instruments. It’s like painters exchanging brushes. The music often takes on a heightened more uniform appearance, and the personalities of the performers are no longer dominantly perceived by their physical appearance, but rather by their musical feel. 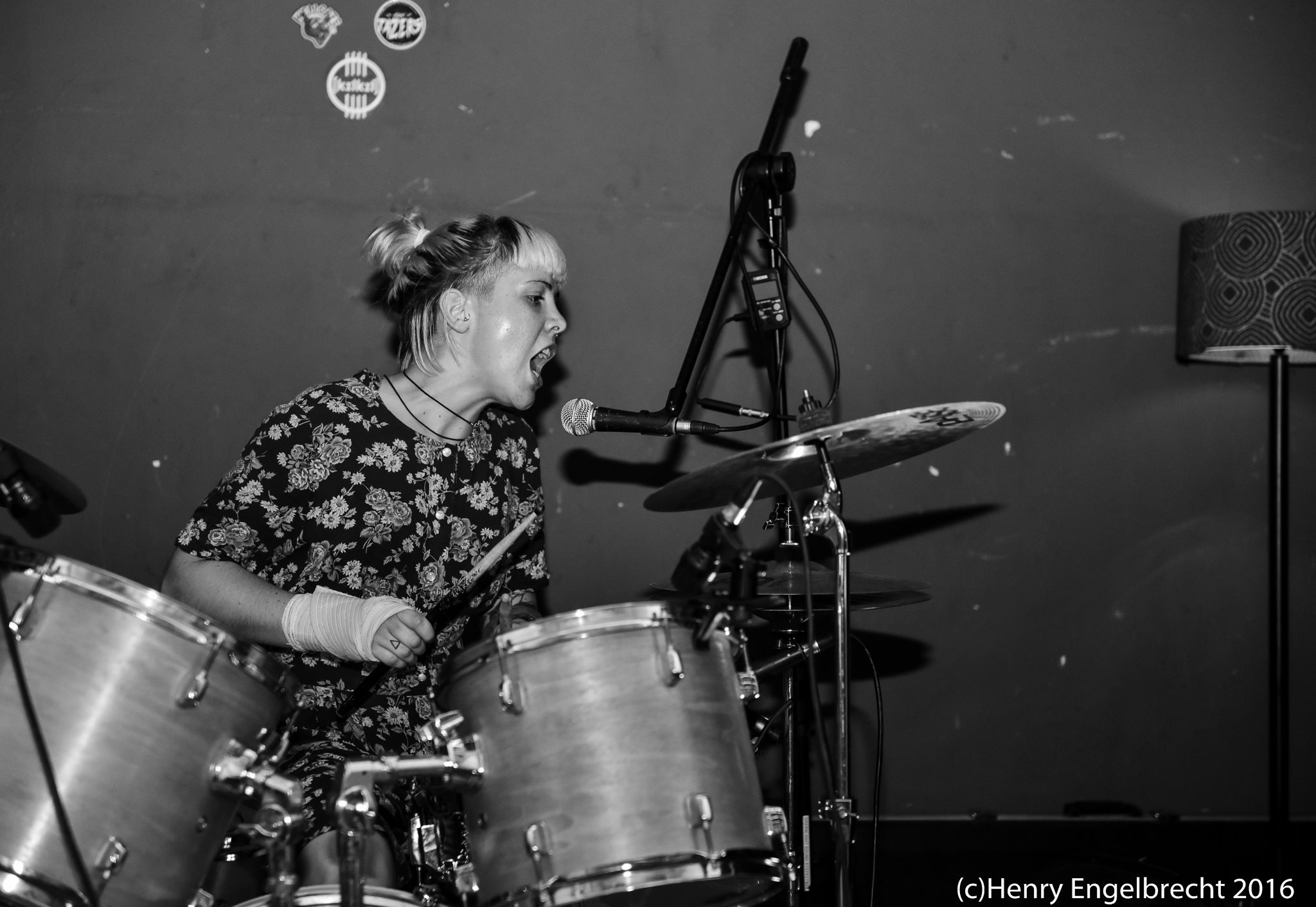 It was the first fresh excitement of the Year wet with prized rain drops, international bands, seeing all the friendly faces you missed over the extended sea sand December holidays and being bombarded with ironic New Year’s resolutions.

– Fuck, I love me an ironic New Year’s Resolution.

I had made pretty much none – New Year’s Resolutions that is, mainly because I enjoy my life and I especially relish Red Right Hand in it. If you haven’t been to any of the Red Right Hand or Bobbejaan parties, well stop being a pompous shithead and…go.

As per usual the lineup was one of ambitious magnitudes; I missed the first half and got there just in time for one of my all-time South African hero-bands. Now I’m not referring to the average hero – like Riaan Cruywagen is the hero of news room etiquette or Pilates Instructor Jane, who is Tannie Elsa’s hero from saving her from social desolation…

No these are real heroes, and they are called the Make Overs, basically one of the most underrated Bands South Africa has ever had. The lady/man duo had just returned from the states, where they amazed all around. Seeing them again, felt good – it felt natural – and it made me want to have a real reason to cause a riot.

Make overs fans are one of a kind, although the music is literally designed to make you move – you tend to stand back in awe most of the time, look around you, see the rest of the gaping audience and then eagerly lean over to your bystander and shout over the intimidatingly good music – ‘ HOW FUCKEN GREAT ARE THEY ‘ – with overtly eager nods, it’s an affirmative yes !!!!The ginger hair flicks, the best girl drummer muscles and their music makes me proud of the South African Garage/Punk scene that is rearing its ugly head oh so graciously. 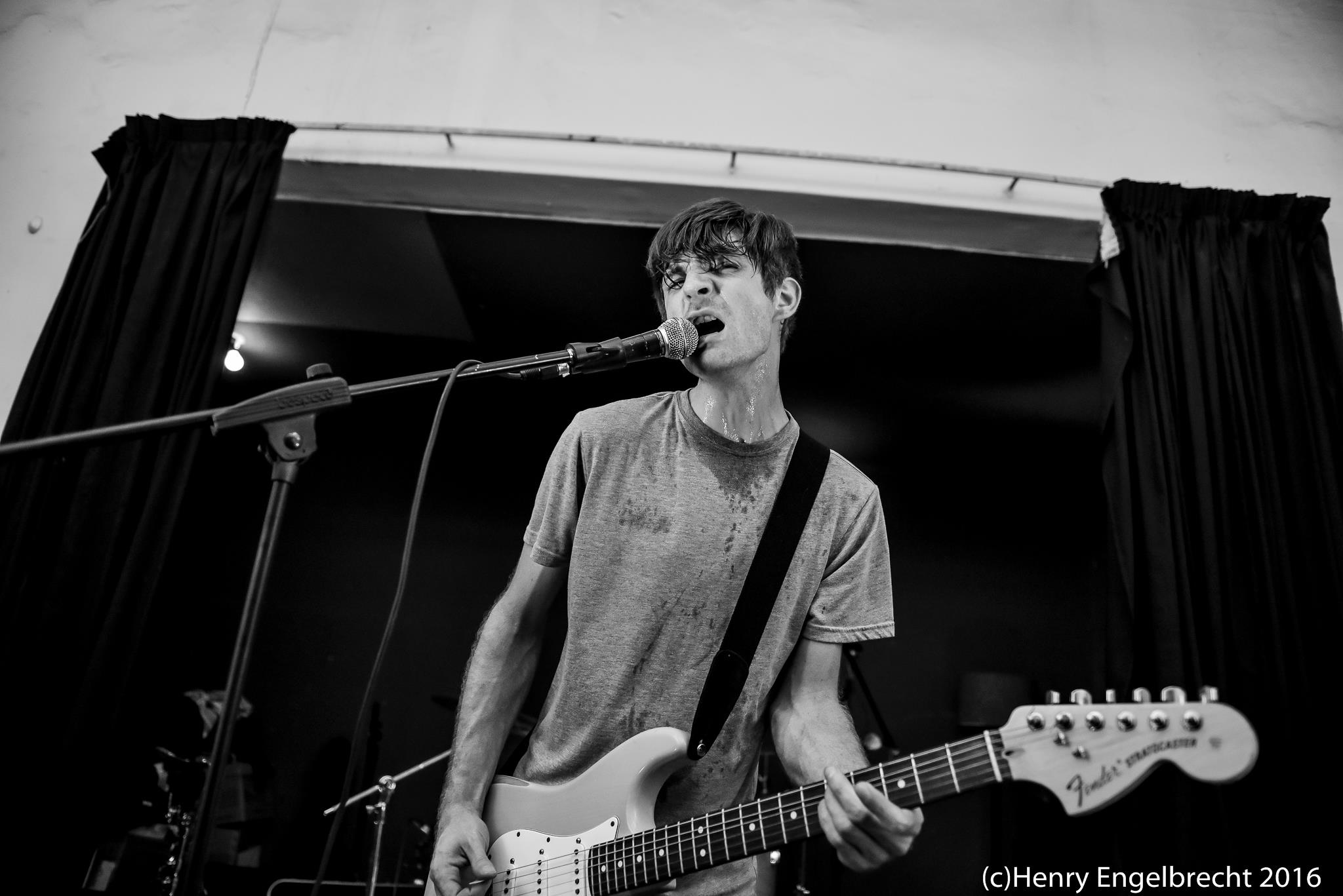 After another Jägerbomb special, drunken chats with old Friends on the iconic ‘stoep’ of the Belgrave Hotel, I had the hard realization of another New Year beginning, thanx to this immediate setting it was a little more sugar coated.

I had found my little back yard garage punk love nest…right here in Pretoria.

These three boys from Jozi town are some of the nicest blokes I’ve met…The Moths.  As in Red Right Hand tradition, the band started and I was still talking immense amounts of shit outside on the ‘stoep’.

With a swoop past the bar for another special, Red lights and  the best boogy beats made me shake my 2016 ass (without resolutions) to the Moths. The young overly enthusiastic girls next to me seemed to not only enjoy the good music but the tripod of gleaming man-band hope that braced the Red Right Hand stage. I can only agree with these juvenile delinquents to my left, the moths are pretty darn fucken great. Their surf rock and endearing stage presence boomeranged us straight into the international Band Glory all the way from Reunion Island. 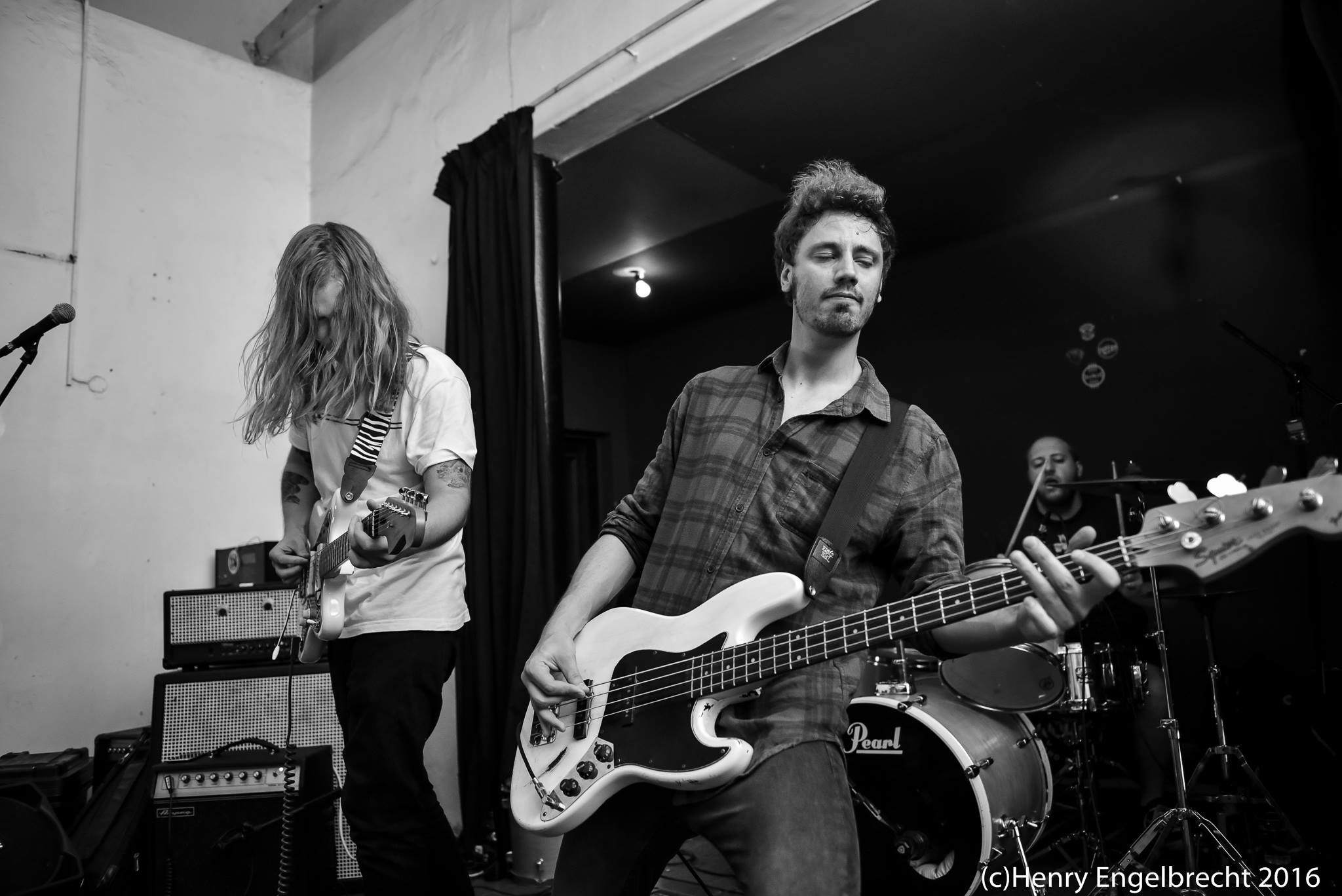 Kilkil took to the stage and immediately stirred up much intrigue. Pascale stood with her bass, Johny sat behind his drum kit and Charlou behind all his gear to put the synth and sax into this French punk band from the little French island in the middle of the Indian Ocean, Réunion.

Kilkil started playing and my ears perked up and listened intently as they had never heard such a killer amalgamation before. The band brought together elements of punk with sweet bass lines and intense drumming, some saxophone and some synth keys, all of which made for a rather interesting and totally unique sound. I snapped out of the synthy punk gaze and took a look around; I chuckled to myself as I saw the people in the audience have a similar look upon their faces, one of ‘oh-my-god-what-is-this-French-Punk-Goodness!?’

Kilkil blasted through their synth punk set with a demanding presence, elements of shoegaze in places and in your face punk in others, a band with a great dynamic, and completely unique! After all, that is what music is about, especially the undergound scene! This is musical progression at its best, and we were lucky enough to have enjoyed it!

Overall a great night out! 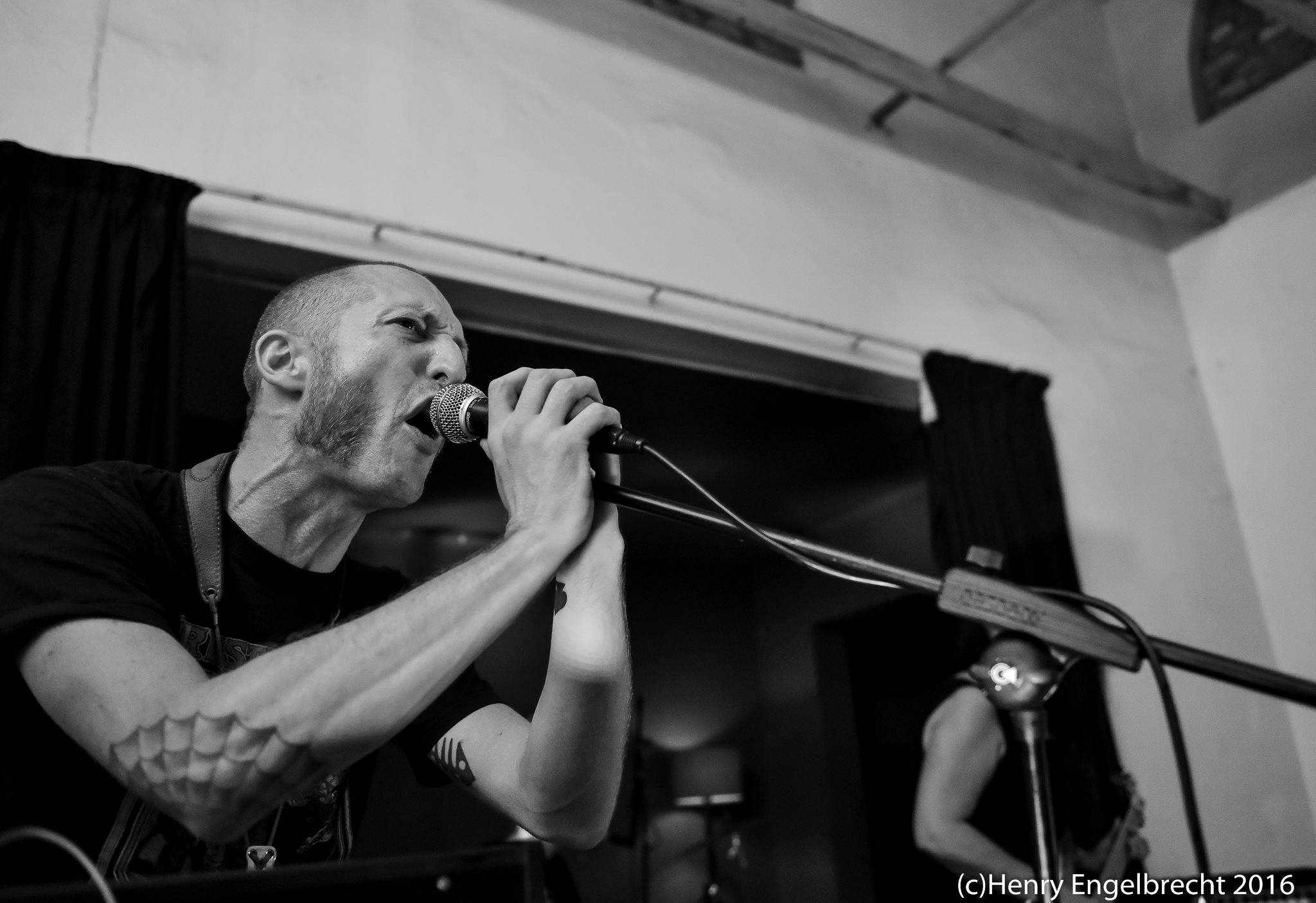 Thanks to the amazing local talent that supported Kilkil and Make Overs on their tour of the country.

And thanks to Henry Engelbrecht for his photography on the evening!