Excitement is building as Leftover Crack, the band your mother warned you against, are coming to our shores in a few days time! Most of you know what to expect, and probably have the six pack in the fridge ready to rock and roll for Friday nights first show at Rumours Rock City!

Leftover Crack are a hardcore ska band from New York City and have been part of the punk scene since 1998, following the break up of the band Choking Victim. The band have released a number of albums, EPs, splits, and compilations. Their first compilation coming back in 1999 called, Give ‘Em the Boot II (Crack City Rockers Demo) was released on Hellcat Records, and is a far stretch from the bands latest full length album, Constructs of the State, which was released in 2015 through no other than the mighty DIY kings Fat Wreck Chords.

The bands name, Leftover Crack is explained by Stza (the bands vocalist) as being an oxymoron, and is based on the idea that crack-cocaine addicts are known for vigorous use, and are unlikely to have any “leftover” crack. I’m sure that last bit of info has made you a much more insightful Leftover Crack fan. You can thank me later…

Here is their song Bedbugs & Beyond.

What can you expect?

Well, expect hardcore ska punk, face-melting mosh pits, sweaty venues, and the best local underground bands our scene has to offer! Expect to have the time of your life! Expect energy, and your body to be slightly sore the next day. Be it from a hangover, a spasm in the neck due to head banging or the rest of the body from the mosh pit. Expect anti-everything sentiments from the band, yes they are a punk band, did you expect anything else…? But most importantly, expect a great night or nights (for those going to more than one show) out watching great punk!

All you need to know about the tour: 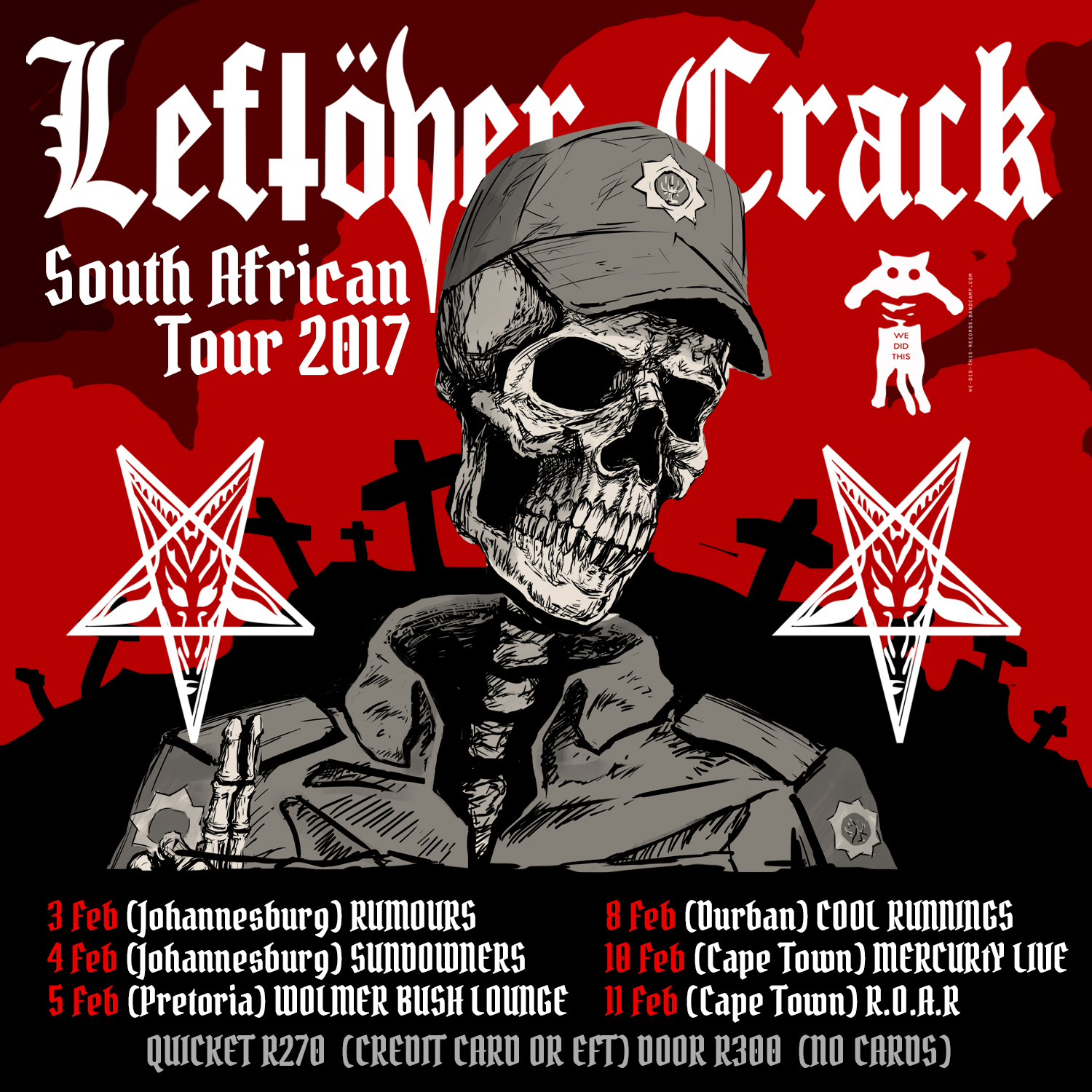 The tour is being promoted by We Did This Records, the local DIY-everything-rock-and-roll label based in Gauteng.
The tour consists of six shows around the country, and will kick off their Gauteng leg of the tour at Rumours Rock City on the 3rd of February, before moving onto Sundowners and Wolmers Bush Lounge on the 4th and 5th respectively. The tour will then continue on a path of destruction down the coast at Cool Runnings in Durban on the 8th of February, before finishing up their tour in Cape Town on the weekend of the 10th and 11th of February, at The Mercury Live and ROAR.
Tickets are available through Quicket and at the venue on the night.