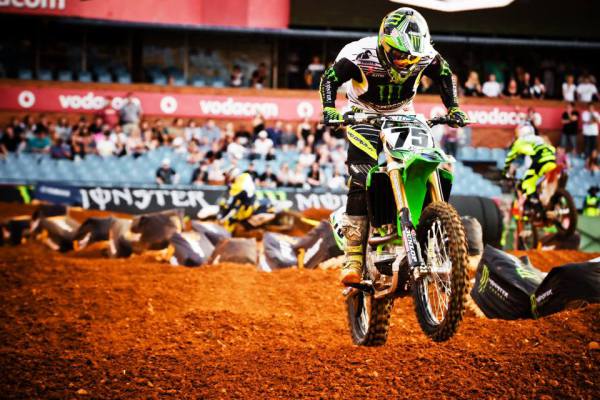 If I sat you down ten years ago and explained to you I was going to take the main pitch at Loftus Versfeld, the home of the Blue Bulls, boerewors and brandy, and turn it into a dirt bike track with 3000 tons of dirt and a few big air ramps, I would have been given a firm klap and been told to go sit in the corner with the other children. But the fact of the matter is that South Africa, Pretoria specifically, has changed. People want to see extreme sporting events, they want to be seen as an alternative city, and that’s exactly what Monster Supercross Africa is, EXTREME.

To explain very briefly what Super Cross actually is, Super Cross follows a racing format, a set number of riders will race special motorbikes around a dirt track that has been specifically designed to have sharp 180 degree turns, various ramps and obstacles. The winner is the person who is able to complete the set number of laps in the quickest time. If you are thinking about people like Travis Pastrana doing backflips and various other tricks on big air ramps that is called Freestyle Moto Cross. The main difference is at competition levels FMX is decided via points and does not follow a race format. Although Monster Supercross Africa had elements of both, Supercross was the main focus. To put it bluntly its loud, it’s dirty and it’s a lot of fun to watch.

What Monster Supercross Africa (MSA) set out to do was to crown the king of supercross in Africa, and they spared no expense doing so. MSA is the biggest event of its kind, with a total of 47 riders from 9 different countries showcasing the raw power of the sport.

Saturday the 1st of November was the perfect day to have an event like this, the Pretoria weather was smiling down on us, blue skys and a warm breeze made for the perfect beer drinking atmosphere. The Grind crew met up outside the stadium to distribute the tickets Monster Energy had given us, and immediately in our group there was this feeling of anticipation, like we were all expecting to see something awesome. Walking into the stadium itself was a serious culture shock. To see the actual track laid out on a 100 year old rugby pitch is awe inspiring and the only thing stuck in my mind was “man, that’s going to be a bitch to clean up!” After checking the programme to see what we wanted to watch it was decided beer was the first order of business before the event started. The thing about Loftus is, it is a dry stadium, so you may not take alcohol into the stands, you have to drink it in the beer garden. As we navigated our way to the bar, that sinking feeling of waiting in a queue with a group of sweaty drunk men breathing on you began to take hold. Luckily one of our ticket winners had asked security if there was another bar we could go to and promptly lead us to the best kept secret in PTA, just above the beer garden at Loftus is a clean, air-conditioned, fairly empty bar, which was then decided to be our meeting point between races and events. 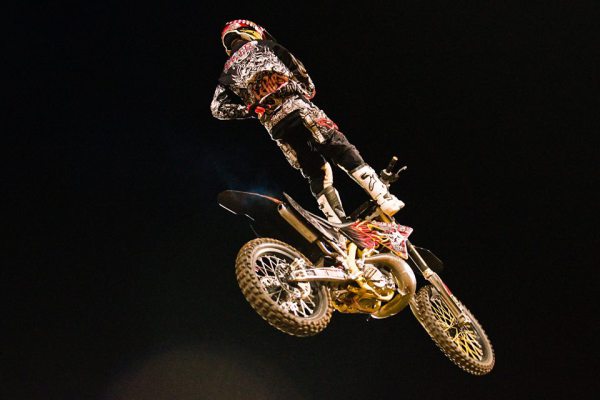 As the main programme started the atmosphere began to set in and it started to feel like we were in for a bit of a wild ride. Once all the sponsors had been thanked each rider was introduced and rode into the stadium to our cheers. Some of the bigger names included crowd favourite Josh Hill from the US, cancer survivor and general legend Cody Gilmore and the two Brits the Grind had interviewed earlier in the week, Jack Brunnel and Adam Chatfield. The local riders were met with huge applause too, and from the get go it was decided we wanted a Safa on the podium. The commentator seemed to favour Michael Docherty and Michael Kok to do so. Monster had invited some pretty big names to do an FMX demo, local legend Sick Nick De Wet was met with huge applause and the big name Australian Blake “bilko” Williams seriously got the crowd going.

The first races started straight after everyone had stood for the national anthem being played on an electric Guitar, and I couldn’t help but wonder what Oom Andires Pretorius would have made of all this if he was still alive.

Watching Supercross is like watching a swarm of bees trying to fly into a glass coke bottle, is all about getting to the corner first and trying very hard not to fall over, like I said it’s quite fun to watch. After getting the quarter finals out of the way it was clear the Josh Hill was going to dominate the day, and the local guys seemed to be struggling to keep up. With that in mind it was time for beer number 2. After completing the important stuff, the first FMX demo took place and what will be described as backflip mania began. The semi-finals seriously showed the difference between the men and the boys and I couldn’t help but feeling a little sorry for some of the riders who were just completely out of their depth. I felt this should be contemplated over more beer. After a quick toilet break and a hotdog, backflip mania continued, once that was done we heard the terrible news that the beer was finished and we would have to switch to brandy and Coke. What’s known as a last chance race was held next this gives the riders who haven’t qualified for the finals the chance to do so, and finally our local boys stepped up to the plate with both Michael Docherty and Michael Kok qualifying. After one final trip to the bar, in which the bartenders had begun to line up our drinks even before we got to the bar it was time for the finals. From the get go I wanted a South African to at least finish on the podium, but I also wanted Jack Brunell UK (Check out our Interview with him) to do well too, but today was not his day and after bolting into third in the first lap, he fell just after the first corner on lap 2 and would end up finishing Sixth. Like I said josh Hill dominated the entire race and eased into first place with Cody Gilmore second, and out of nowhere our boy Michael Docherty finished third. 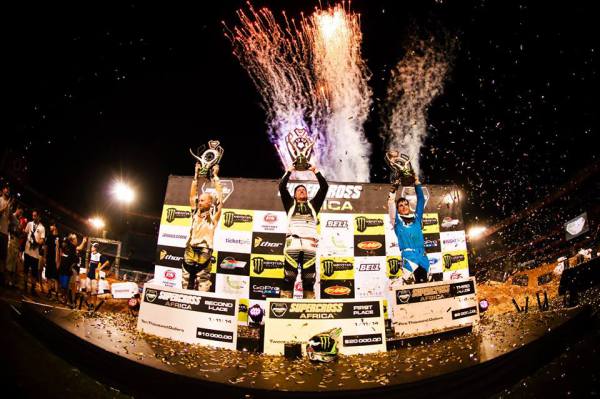 It was now time to do some celebrating. After finishing playing my set at the pit party I spent the rest of the evening shamelessly taking selfies with drunk promo girls and harassing riders for free shots.

All in all an absolute champion day was had by all who were there, my only hope is that this kind of event becomes an annual thing and next year a South African wins! Thanks to Monster Energy for an awesome time.