A night of Leftover Crack and Punk Rock 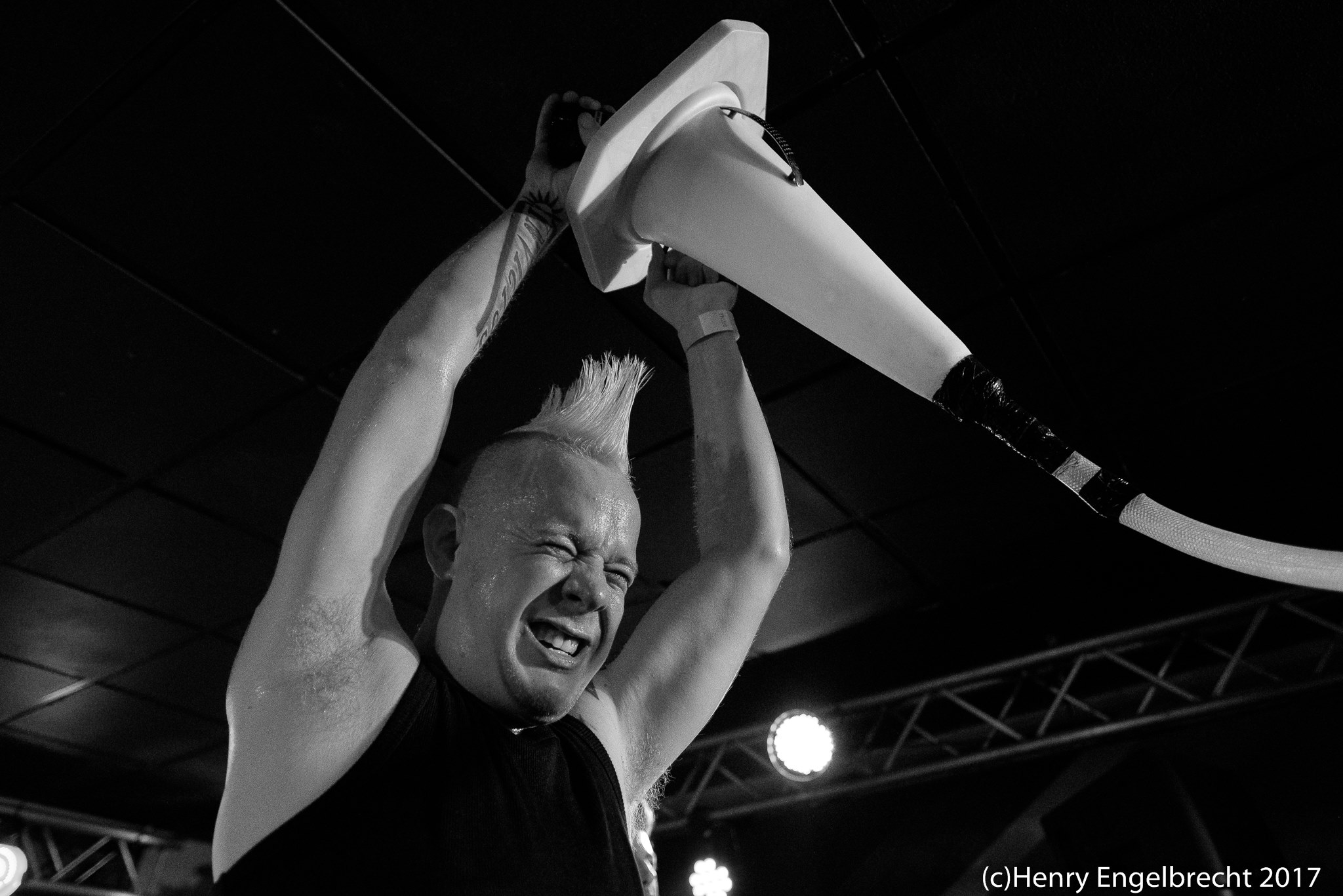 It’s been long overdue that South Africa got a new wiff of that stanky fart called punk rock, because, you know, if you call yourself a punker, chances are you also like the smell of your own farts ( But don’t we all). The crack that cracked open and blessed us with its stanky stankness came in the form of Leftover Crack, a crusty punk rock band hailing from the Lower East side of Manhattan New York City. Lower East Side NYC sounds amazing to us Saffer Punks, and the chance to experience some internationally acclaimed punk was a fix I had to get. For those of you unfamiliar with Leftover Crack, allow me to enlighten you.  Formed in 2000 as their parent band Chocking Victim broke up, many songs of the lead singer were ‘leftover’ and never recorded, hence the name. This band is known for their far, far leftist views, being Anti pretty much everything concerning the right. The band is founded upon their lead singer Stza (Scott Sturgeon) who is also the songwriter and main instigator. Supported by guitarist Ezra Kire, and bassist Alec Baille (Choking Victim), and with drummers coming and going, the band has played with the likes of J.P. Otto, Brandon Possible, and Ara Babajian.

As I arrived at Rumours Rock City’s brand new venue, I had already a good buzz going which turned into full blown exhilaration as I saw our very own tattooed clad, cool dads rock ‘n roll rockers, The Slashdogs, who had already had a pit going full steam ahead. Rumours’ new venue is far removed from what you would expect from a punk rock venue. It was CLEAN, and there was SERVICE, not to mention the floor being vomit free. At first I felt a bit robbed of my comfort zone, or shall I say comfort cesspit, which is a punk rock show. But as the drinks started magically appearing in my hand and were thrown back into my throat, I was on a highway to hell.

The Slashdogs did what they have been perfecting for years, and set the standard high. Showing their flexibility as well with Paul Goia on the drums  for the night, where as he usually shreds the guitar. Rocking his trademark Mohawk was William Bishop AKA Big Willy positively electric on stage keeping no reservations despite having to play the next show for Fuzigish as their trombonist. The Slashdogs had killed it, and the crowd had a taste for blood. 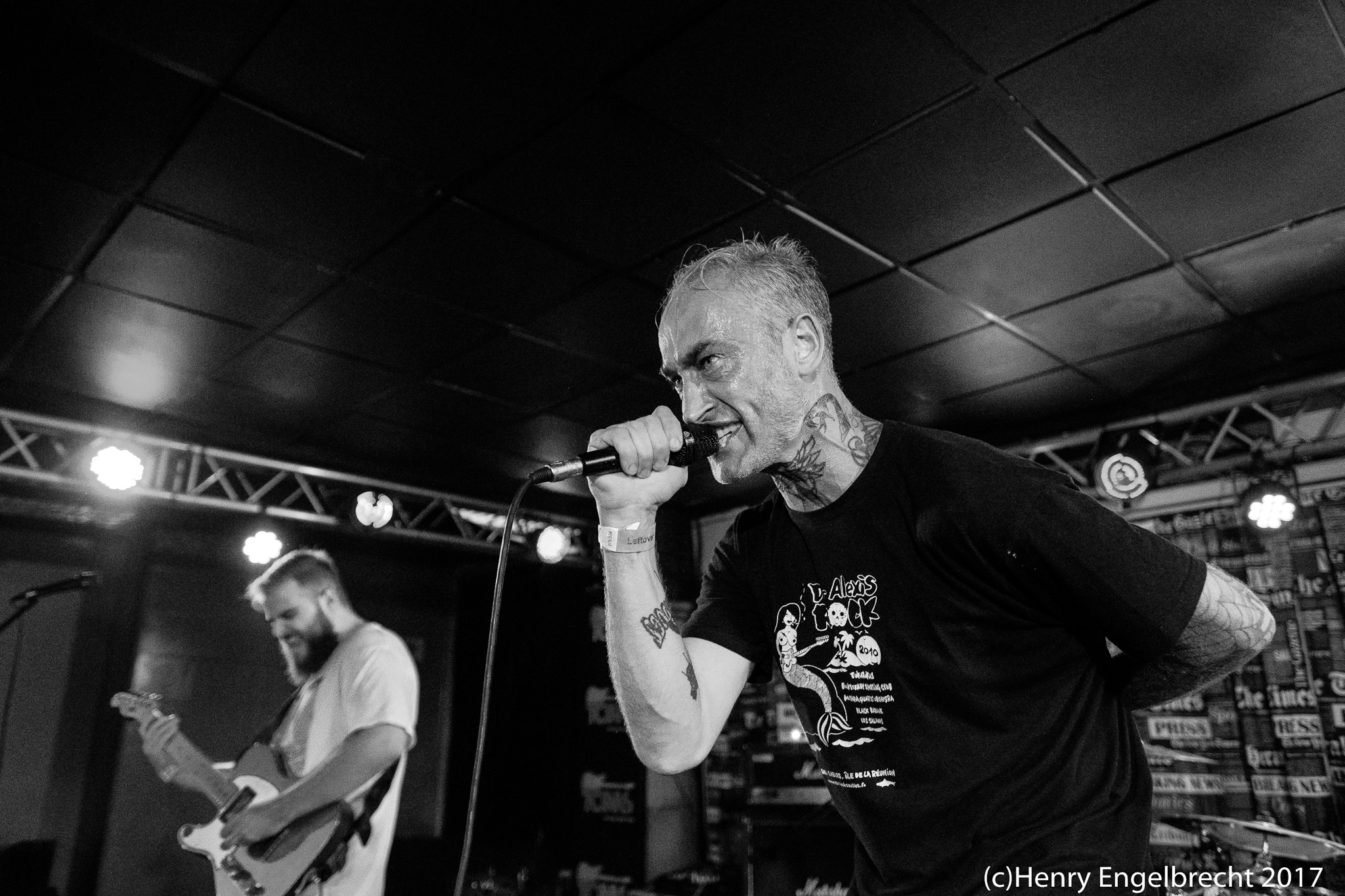 Up next was Fuzigish,who  has also been around the block a few times, and even with replacement band members on drums and bass, we still had Jay Bones iconic voice to take us back to those carefree reckless days. Pumping out classics like, ‘Blow My Mind’, and ‘Monique’, and keeping the Fuzi spirit alive with newer songs such as ‘Little Bird’. If I was exhilarated upon my arrival, at this point I was sweating , roaring and losing my shit in the mosh pit! 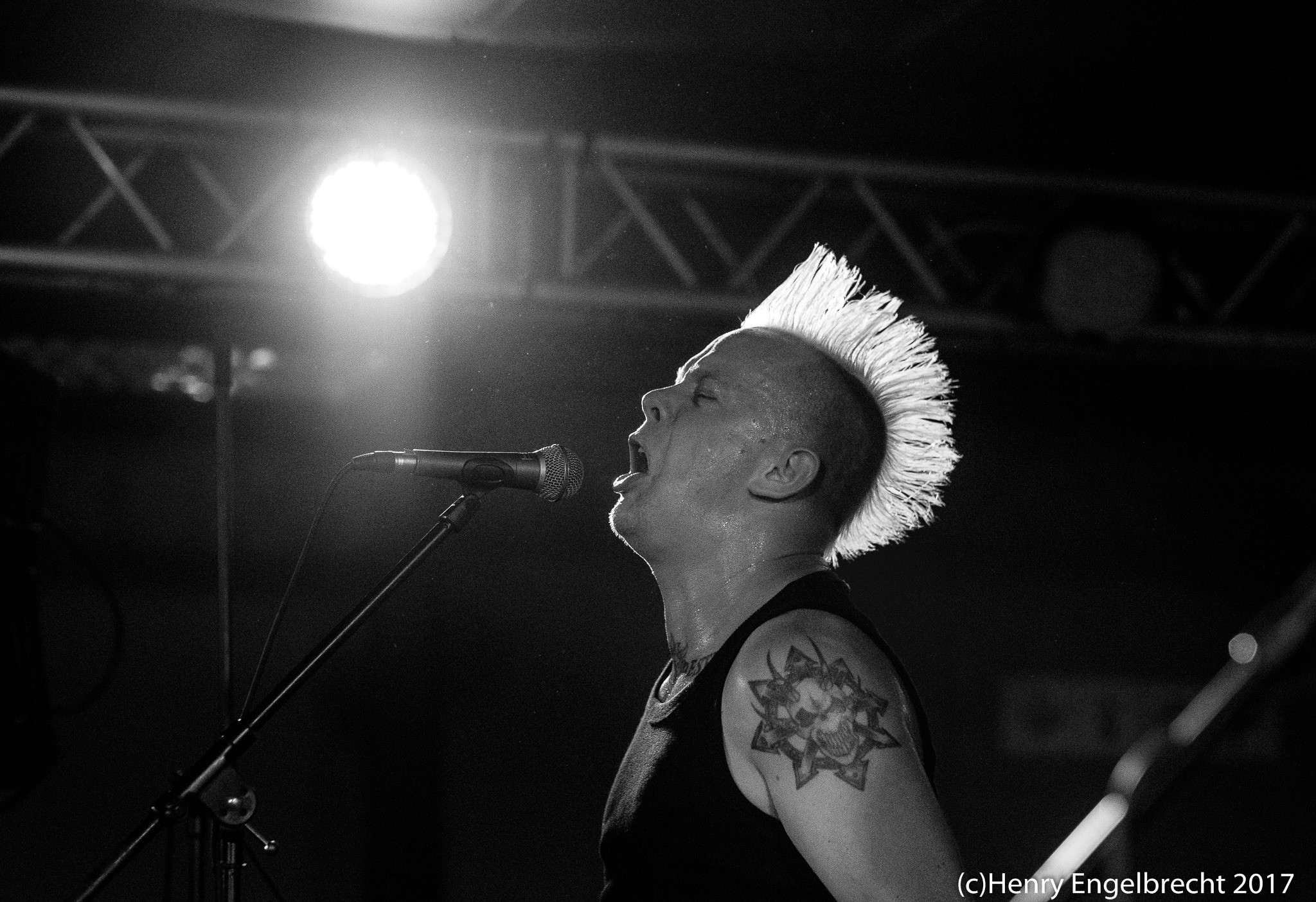 Finally it was time to get a taste of the sweet NYC crusty punk! As Leftover Crack took the stage, I was expecting a bunch of leatherclad, facially tattooed, dirty punkers. What I got was a bunch of normal looking bros. Meh, not to worry, it’s like Jay Bones is anything special to look at. Besides who am I to judge? The lead singer Stza however looked like he got given the proverbial punk punch, with face tattoo’s sliding down the side of his jaws giving him quite the manic look. 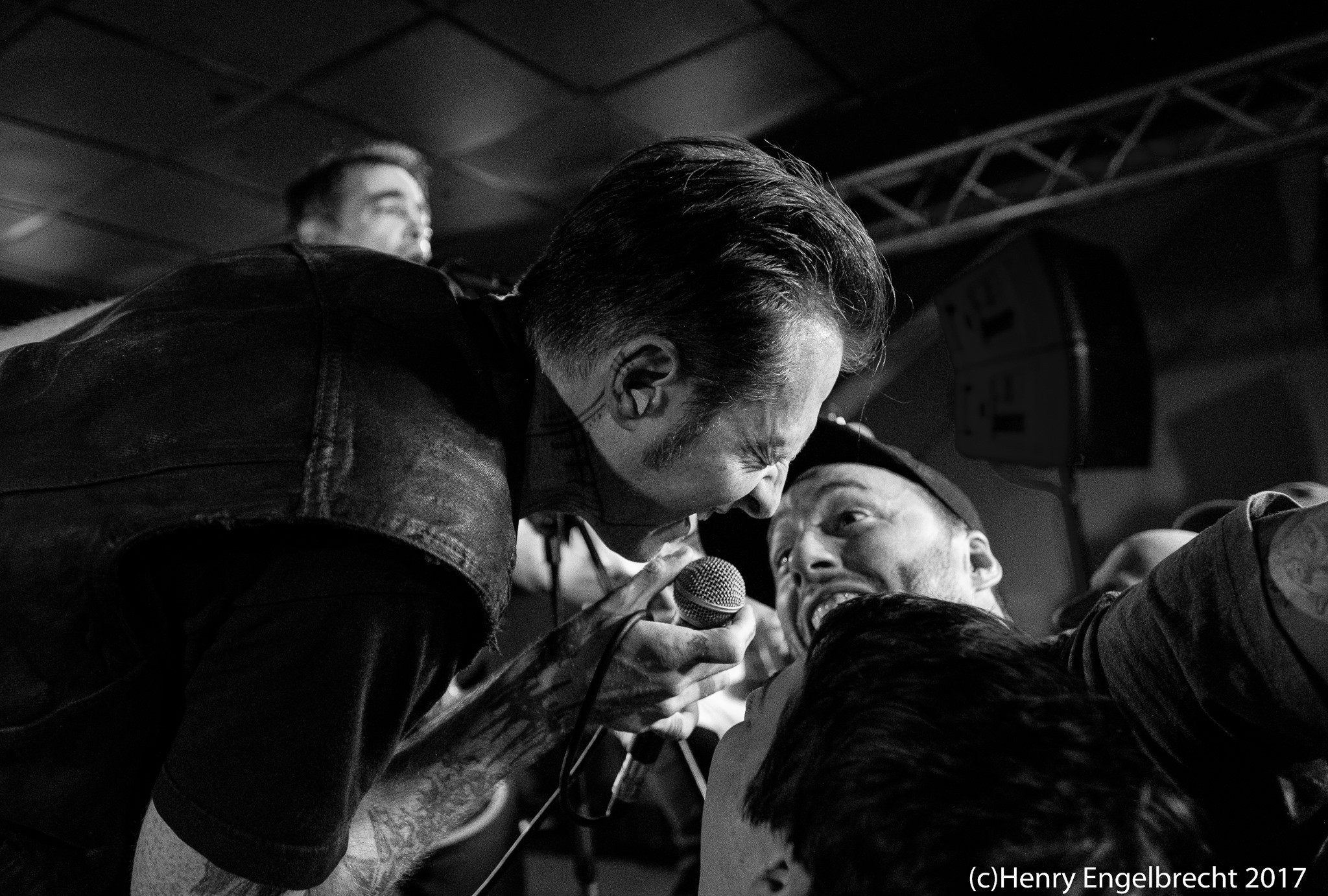 I was bristling at this point ready to jump out of my skin. But before I get into all that, It’s safe to say, that as South Africans, we don’t get to see the greatest variety of bands, and this is through all spectrum’s of music, be it punk or goddamn R&B (yeah fuck you R. Kelly). So we tend to pedastalize bands that we grew up with, or play on repeat through the internet. I for one, am very guilty of this, being the typical teenager who was angry at his parents for no apparent reason, and just wanted to break down the world. I turned to music as an outlet. All I ever wanted was to be in CBGB’s with the likes of the Ramones and my bae Blondie. Leftover Crack was no exception.

As they started to play the mosh pit escalated into that sweet whirlpool of reckless abandonment we love so much. Here I have to give a massive shout out to all Jolburgers, those folks know what the fuck is up! The music was fast, hard, and ripped through our ears and bodies taking no prisoners. It was here, that tangible moment of losing yourself in your most desired form of art. It was a blast to say the least. They even treated us to some long lost Chocking Victim songs which was a pleasant surprise. After a few songs I had to take break and light up a smoke to catch my ‘breath’ and just relish the moment. It was at this time, of all times, that the lead singer asked the crowd to please refrain from smoking while they played the rest of their set. If Jesus were to appear next to me, I would have been less shocked. This guy, with his face tattoos and life of squatting and fighting cops in the streets of New York, just asked us not to smoke. Fuck you, I lit another and saw to my great pleasure the rest of the crowd do the same. Gotta say, lost respect right there, but also gained some for the punks of Joburg.

This sparked a train of thought in my hazy brain. I started listening intently, and watch closely to the band play the rest of their set. They were not tight, far from it, but as a punk lover you look past it, fill in the gaps if you will. They lacked energy, they could not hold a candle to flaming glory which is Slashdogs and Fuzigish (Heres to you Ryan, and Big Willy). Just as these thoughts took form, the set was over. Just like that. The crowd had not had its fix, so naturally there was call for an encore which they thankfully gave us.

Going outside to catch much needed breath of fresh air, I realised something. We may have a hand full of bands in South Africa, but the ones we have are fucking killer. It saddens me that it had to slap me in the face to finally realise this. If I could choose to see Leftover Crack, Fuzigish, or Slashdogs again, I would tell the fucker Stza to go play with R. Kelly where they both can piss on sheets and cry about their mommy issues. Don’t get me wrong, Leftover Crack played  a role in my appreciation for punk music, but it was bands like Fuzigish and Slashdogs that kept me there through the years. These are the bands that are there for you most weekends, and when you need them the most. Don’t take that shit for granted. Support your local bands, appreciate what you’ve got, before its too late.

Basically what I’m trying to say is, revel in your own farts, own that shit.

Big thanks to Conley Annandale from We Did This Records, and to Henry Engelbrecht for his incredible photography!