One HELL of an interview with the ever-frisky Hellcats! 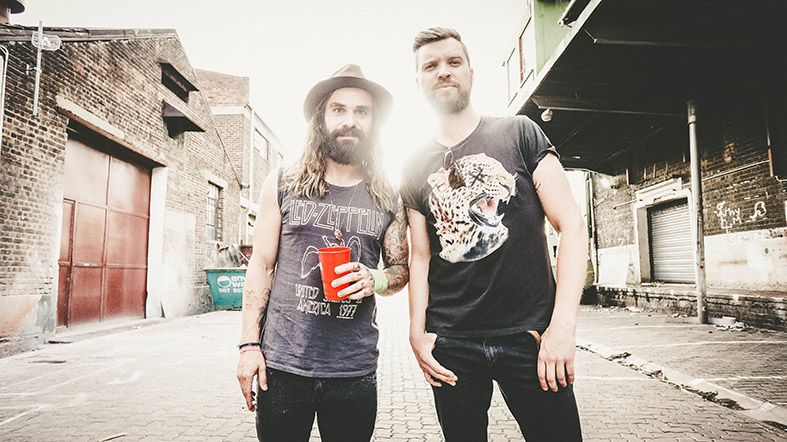 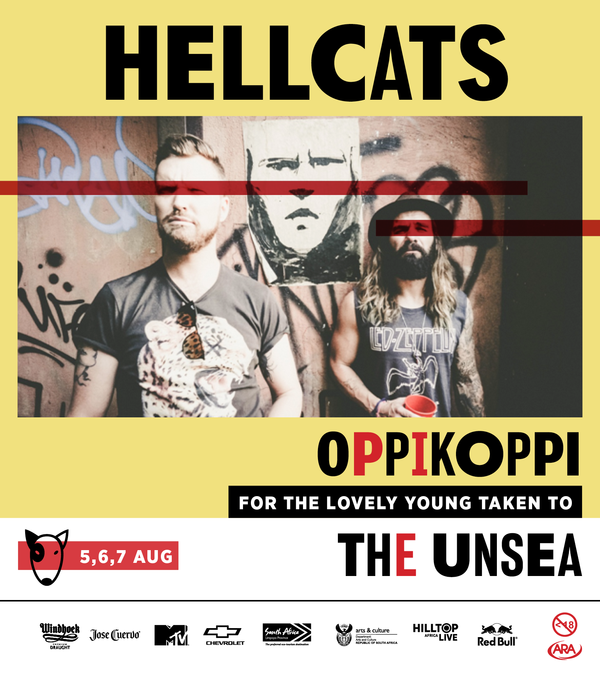 I had the pleasure of interviewing the Hellcats after it was announced that they would be playing OppiKoppi this year! We Grinders were truly pleased to hear that they were going to be reveling in the dust and I was even more excited to have a chat with the guys. It played out as follows:

Firstly, who the hell are you, and what do you stand for?

Hellcats. Peace, love and give no f*cks.

Rock n roll, from a couple of bad apples, that kicks you right in the beans.

(Can we have a brief moment to laugh at the brilliance of that answer!) What’s happening in the lives of Hellcats and what projects can we look forward to seeing?

We are in the process of putting together our third EP ‘A Coffin Full of Hellcats vol 3’ which is pretty cool. We bunked work for a week, listened to a lot of Queens of the Stone Age and Reinwolf and jammed a lot. We didn’t actually f*ckin write anything, but we have some bones for songs that we’ll kick around for the new EP. Then we also shot a rad video for our track ‘Sunlight 1973’ a while back and we’re finally putting the finishing touches on it, so we’re launching that soon too. You are in it actually, so you know it’s good – x

(Cringe!) Tell me about where you were when you found out that you were listed for Oppikoppi 2016 and what your immediate reaction was.

Alessandro called me while I was at home, jolling with my dogs, Batman and Robin. I didn’t believe him at first because we’re always f*cking with each other, telling the other one we got a call from Glastonbury or Lollapalooza or some shit. Anyway, we were both f*ckin psyched. We’ve been applying for a slot at Oppi for years in other bands, with no f*ckin luck, and now with Hellcats, we decided we weren’t gonna submit. True as f*ck we get the mail inviting us to play. Go figure.

If you could nominate any South African musician to do the naked run at Oppikoppi who would it be and why?

Guido, the bassist from the Tazers. He barely wears clothes to Oppi anyway. His mom has been taking him to the festival since he was like 5 and he never wears shoes – but like for the whole weekend. That goes for shirts too. So I guess he’s halfway there anyway. May as well go vol Monty.

I guess you’re going to be playing tracks from your new album, tell me more about this particular venture.

We might play the tracks, I’m not sure, we usually write the set list just before each show. We kind of let the mood of the night/day determine what we play for that gig. As for the new EP, we recorded the tracks with our pal Levon Lock at Big House studios in Joburg. It was a really chilled experience. We just hung out, had some beers and laid the 3 tracks down. It all happened over a couple of hours, we had booked two days in studio but were real happy with the first few takes. We’re all for getting it done and not f*cking about too much if we can help it. We find if we ‘faf’ too much with our music, it starts losing a bit of balls (beans so to speak), ya know? There are a few f*ck ups in it, but that’s ok, people can just deal.

Alex(Alessandro) recently had surgery that affected his drumming arms and turned him into a “T-Rex” front man – how has this changed the dynamic of your live performances?

Well, to be honest, Al was a bit of a stubborn f*ck about the whole thing actually- haha. When he first injured the hand he played through 3 shows like nothing had happened. After that the pain became too intense and he had to have surgery. We made provisions, got our pal Max Schomburg from Raygun Royale to sit in on drums and we played Capital Craft Beer Fest for the first time as a 3 piece. Alessandro was front of stage and he took to it like a dog finding out it was able to lick it’s own nuts for the first time. Max also f*ckin killed it on drums and we all had a rad show – one of our favorites of the year actually. The first time Al got back on drums was the day of a show we were playing at Good Luck Bar a couple weeks back and he told me that he wanted to jam, I reluctantly agreed because his hand still needed to heal. It was a couple hours before the show and he picked up his sticks and started playing for the first time in 6 weeks. It was like watching Forrest Gump break through his leg braces and bolt full kick down the dirt road. He played that night and nailed it. As grateful as we were to max and as fun as it was to have him, Alessandro is Hellcats’ drummer and he is back on his throne where he belongs and we are back to playing shows as a two piece. We are, however, taking a month break before Oppi, just in case.

Which International act would you most like to see perform at Koppi?

Which music festival would you like to attend – anywhere in the world?

Glastonbury. I went ages ago, but it blew my mind. We’d prefer to play instead of just attend though. If anyone asks.

If you had to compare the band with characters from famous sitcoms who would each member be and why?

I think Al would be Bart Simpson because he’s a 30-year-old kid that doesn’t give a f*ck and is always getting into shit.

I would probably be Phil Dunphy from Modern Family because my wife is hot and no one gets my stupid jokes.

Look forward to seeing you guys take over Oppi – thanks for a great interview and good luck with that recuperating hand!