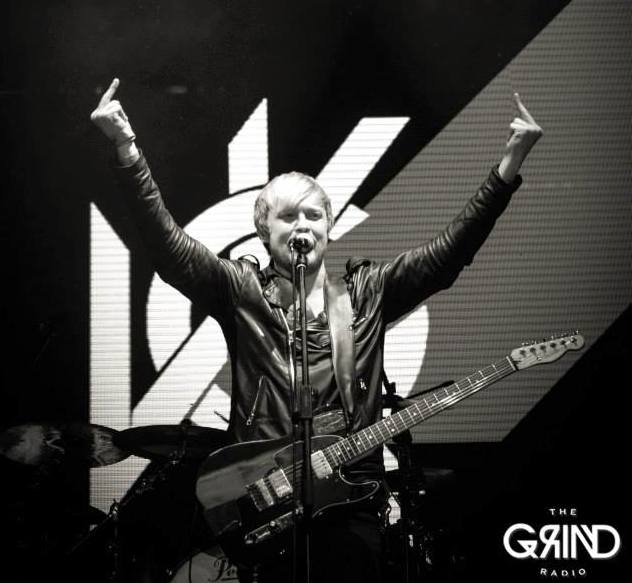 It’s 04:00 Thursday morning, the 7th of August 2014. Unlike every other morning, waking up is not a problem. The anticipation is overwhelming. I start packing the car (booze first obviously).

04:30 I meet the first people travelling in the convoy.

Its 05:10, the convoy stops in Wonderboom to meet up with the last part of the convoy. It’s 05:40 and the Odyssey begins. We are on our way to Oppikoppi 2014, the 20th of anniversary of the dust bowl. It’s 08:10 we’ve arrived, the tent is setup and the first beers are opened.
Its 12:00, we’re slightly inebriated and everybody in the camping area is ready for the first band to take the stage and so the rollercoaster ride begins!!!!! 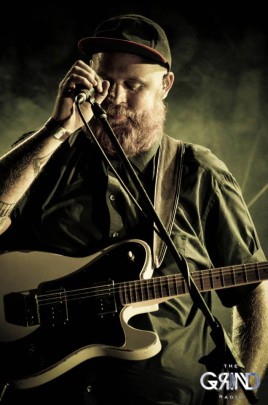 Werner Olckers and the boys from Wrestlerish announced that Oppikoppi 20 will be the last time that Wrestlerish will be on stage, a definite loss for the South African music industry. Wrestlerish rose to stardom in no time. The just wrote hit after hit and it seemed like the train will never be derailed. Never the less, at Oppikoppi they gave their fans a proper curtain call. The crowd was dancing from start to stop. I can’t wait to see what side projects stem from the ex-Wrestlerish members. Thanks for the good times and thanks for rocking it out one more time! 8/10

What I love about Oppikoppi – accept the party, people and the vibe – is the new bands that you are introduced to over the 3 day poespas (a recognised Afrikaans word for a total fuckup).

I tip City of Heroes to move through the ranks pretty quickly and become one of South Africa’s premier rock outfights in no time. Their new single “Lights like Hurricanes” is just on a next level. Their live performance was so good and so tight, that it creates the perception that they have been rocking out for the good part of forever. Keep it up!!! 8/10

01:00 could not come sooner. If I could hazard a guess, I would say that 90% of the people that were at Oppikoppi by 12:00pm Thursday night, watched Bittereinder (Approximately 9346 people). By this time I was super tired and needed a pick me up. Bittereinder was exactly what the doctor ordered.

They started off their set with Kwaad Naas and it felt like; what I would imagine Mario feels like every time he eats one of those magic mushrooms in Super Mario (Mario you ol’druggie you). In an instant the beat manifested itself in my feet and the boogie was on!! Not only is the music awesome and the performance tight but, Louis Minnaar mesmerizes the audience with the visuals (it was at this point that I was super glad that I stay away from any hallucinogens. That eight-limbed pineapple would scare the living shit out of me). If I understand correctly Jaco van der Merwe (vocals) got married the next day. So thank you for dropping the beat at Koppi before you took the plunge! 10/10

Its 17:00 at the James Phillips stage and all is right with the world. All the guys are geared to lift their girlfriends on their shoulders. Why? Because the panty dropper is next on stage.

Yeah all you girls can deny it all you want but, when Matthew Mole says jump you ladies say “Of course I’ll marry you”. That being said; what an entertainer. He is one of those artists that ooze natural talent. To get an Oppikoppi crowd to sign along to a cover of Heartbreaker by The Black Eyed Peas (Not your run of the mill Oppikoppi prawns cup of tea) is testament to Matthew Mole’s entertainment prowess. I wanted to check out Matthew Mole at Koppi because, I was sceptical and I am glad to say I’m now converted! 8/10

Put another shrimp on the barbieee…All the way from Australia. Ok, I’ll be totally honest if it wasn’t for a persistent fellow camper, I would have never seen Sarah Blasko in action. The top bar was packed. A three piece band with Sarah Blasko as the main feature. What a treat. Her translucent voice takes you to places and spaces you’ve never been. At Oppikoppi crowds are usually unruly and all they care about is partying and dancing but, for the hour that Sarah Blasko graced the stage, she had the crowd in the palm of her hand. You could hear a hippie dreadlock break in the deafening silence. Absolutely fantastic edition to the Oppikoppi line-up and whoever suggested Sarah Blasko be added to the line-up, deserves a Bells! 9/10 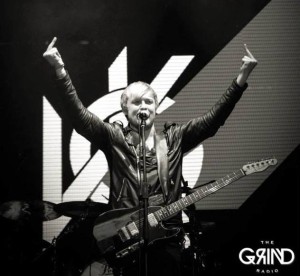 I have said it so many times but, I’ll say it again…Van Coke Kartel must be the band in South Africa that has shown the most musical growth of any other South African rock outfit, over the last 7 years.

Francois van Coke and Wynand Myburgh are legends in their own right but, damn Jed Kossew (guitar) and Dylan Hunt (former drummer for Pestroy) gave Van Coke Kartel the edge that they needed to initiate the shift from good band, to show stopping band. Van Coke Kartel had the crowd in raptures (or was it the naked guy, most probably on acid, jumping around on stage when they played their new single ‘Sweef’?). 9/10 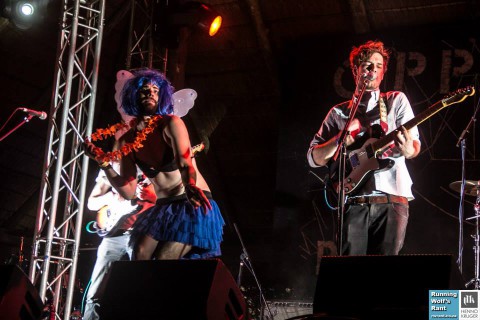 You know when the set starts off with a crazy fairy in a bikini on stage you are in for a good time! And if that wasn’t enough, the visuals on the big screens started rolling… Shortstraw is rapidly becoming a South African crowd favourite. They seem to be on everyone’s lips (Which is a figure of speech and in no way a reference of Shortstraw’s sexual escapades).

I love it when a band can have fun on stage and at the same time be professional. I was backstage when they finished their set…I was speechless; the crowds response was overwhelming. When Shortstraw started their set, it felt like the day was picking up momentum, to ultimately culminate in total magnificent chaos! 9/10 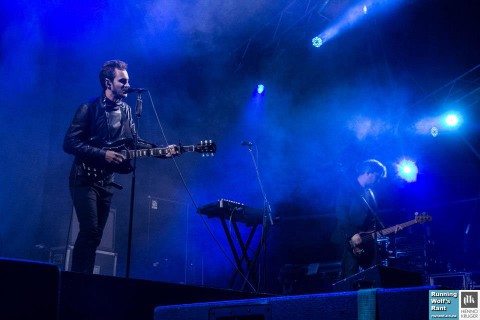 I am not ashamed to say that I don’t really know Editors music but, I was pleasantly surprised. The sign of a good band is how good they are on stage and based on that criterion Editors are absolutely amazing. I don’t know why I was surprised, the band met whilst studying music technology at Staffordshire University, so obviously they would be technically sound.

The music blends exceptionally well and they engaged the crowd without having to say a word between songs. What an absolute pleasure to have seen Editors. 8/10 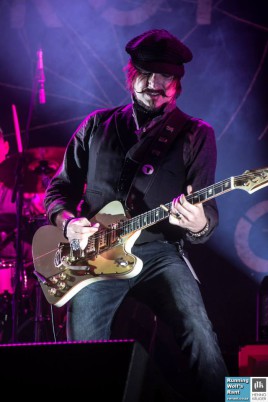 Holy shit!! This is my pick of the festival! I was lucky enough to interview Jay Buchanan – lead singer (Click here to check out the interview). Rival Sons embodies exactly what rock stars should be; fun, professional and humble. No ego’s, it’s all about the music! Much like Editors, Rival Sons demands attention without asking for it! Resistance is futile and you cannot help being sucked into each and every song. The set list catered for everyone; from dirty rock and roll, to a song called ‘Jordan’, which is on the complete opposite side of the spectrum (Tip: Guys if you don’t know how to make a girl yours? Play this song and slow dance with her. I guarantee 6 minutes later she’ll be yours).

Thank you Hilltop and Oppikoppi for booking Rival Sons; it was an honour and a privilege to see them live. 10/10 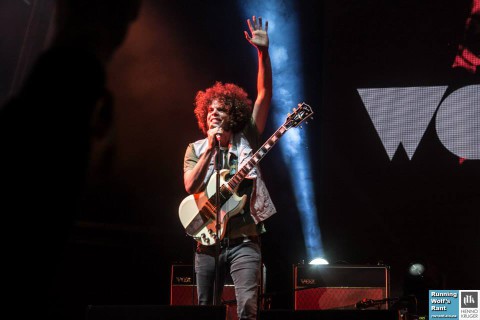 Needless to say, Wolfmother’s show was the culmination of 6 months worth of excitement. Everybody at the Wesley Dome stage was geared and ready for Andrew Stockdale and the boys from Wolfmother to bring the thunder (I’m pretty sure I saw a guy peeing in plastic beer cup, just so he wouldn’t miss one second of Wolfmothers performance).
The Oppikoppi crowd got treated to all the hits that made Wolfmother famous, and of course the Wolfmother connoisseur got to see some of the lesser famous favourites live.

South Africa and Oppikoppi is thankful that you made the trip to come and entertain us in the dust bowl. Salute! 9/10