The south African hills are alive with the sound of epic internationals acts! The year is not even a month old and already acts like The Cure, Imogen Heap and Albert Hammond have been confirming tours to South Africa. British Metal outlet, Temples on Mars, will be gracing our sunny shores at the end of January. Before they strap into their flight we caught up with vocalist James Donaldson.

Temples on Mars will be heading down to Sunny South Africa at the end of Jan!

In 2018, you released your debut Album, and now at the start of 2019, your coming to bless the rains down in Africa.

Busy lads. What do you have up your selves for the rest of the year to come?

Lots more shows, maybe a video or two, and we will begin writing the next album.

According to Google Maps, South Africa and the UK are 13 753,1 km apart. That’s a 187-hour drive via car and an 11-hour flight. So in transit from home to here, how will you be keeping yourselves entertained?

When we checked Google Maps it also said that you can walk it in 103 days so we actually left the UK over 3 months ago and have spent the time walking, carrying our gear, celebrating Christmas and New Year with locals, promoting the tour, and doing interviews.

For some of you, this tour will be a little bit of a homecoming. What’s on your list for must do’s, eats and sees while you are ‘home’?

You were all born and raised in very different places around the world. Often times a bands origin location will vastly influence how they sound. Temples on Mars, in my opinion, has a very universal sound. Was this a deliberate decision or something that grew organically?

The sound is totally organic. We are just guys playing music that we like and which makes us feel something.

You guys will be cruising through 4 cities (Cape Town, PE, Pretoria, and Johannesburg) during your South African tour. If the good people wanna stay up to date on what’s going on in the world of Temples on Mars where can they go? 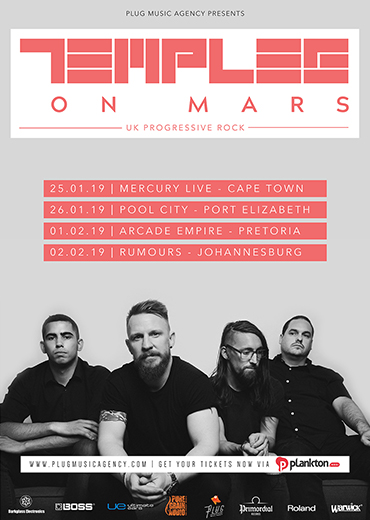