The Kooks To Play Rocking The Dasies 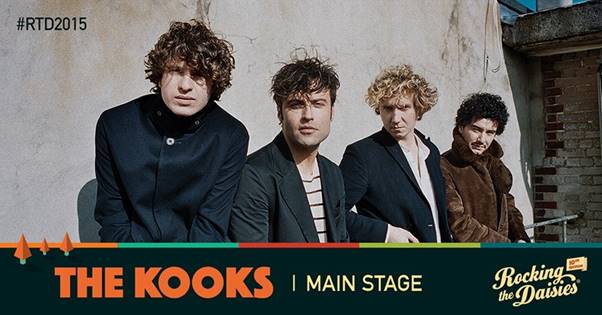 We have all found ourselves victim of false hope at one time in our life. This especially strikes right after a concert. A band you thought you would never see, in this life time or the next, finally comes to South Africa, and blows your mind away. Caught in between the haze of the night, caused by the Cuervo stand, and sure awe of the band/artist performing you are left venerable. So when the charismatic lead singer promises their speedy return you believe them. Why wouldn’t you? They literally just said you were one of their favourite shows. However, a few months past and you slowly start packing away posters and merch trying to forget how silly you were for actually falling for it again.

For me East Sussex boys, The Kooks, were one of these cases. They performed in April 2013 in JHB for a 5gum secret event. I was part of the lucky few that got to see them underneath a bridge in JHB CBD. Their lively performance drew the whole crowd in. They instantly disarmed the hostile mood of the crowed, caused by everyone stuck in the rain underneath the flooded bridge. People who were close to causing a riot started chanting lyrics to songs like Naïve, Seaside, and Rosie. Naturally when their vocalist Luke Pritchard stepped up to the mic and promised their speedy return I gave into the idea.

However after hearing they had released their 4th full length studio album, “Listen”, and were touring all over except close to us my hope sank to my feet.

Then a great thing happen: Seed experienced announced they would be bringing the British indie rock ‘n rolla’s back to the country. The band will be gracing the main stage of Rocking the Daisies held in the a beautiful Cloof Wine Estate of CPT. The festival, taking place 1-4 October, is celebrating their 10th year and is already boasting with a line-up of amazing international and local acts including acts like Milky Chance, The Cat Empire, Fokofpolisiekar, P.H.fat, and Bongeziwe Mabandla.

Joburg fans, before you start angrily mumbling about how Capetonians always have it better, you have not been forgotten. The Kook, Milky Chance and The Cat Empire will be coming your way at Vodacom In the City. The one day concert will take place 4 October at Zoo lake. The event has been moved from its normal Friday occurrence to a Sunday. Ensure you get to see all the acts without getting stuck in traffic.

Tickets can be purchase online for Rocking the Daisies HERE and Vodacom In the City HERE.

Both events allow budget payments for tickets so you don’t need to be stuck on 2min noodles for the rest of the year.